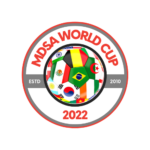 These rules are for the 2022 MDSA World Cup and may differ from previous years.

All pool play, elimination, and quarter final games for all Divisions (10U, 12U, 14U):
· Five minute halftime break (plus a one minute running break between quarters for substitutions only).
· No Extra time

If there is a tie in points following group games, the following tiebreakers will be used in sequence until a winner is determined:

If the score is tied at the end of regulation or extra time, the match proceeds to kicks from the mark. For the MDSA World Cup, there are some modifications to the FIFA  procedure:

If a team forfeits a game for any of the reasons listed below, the score of the game will be listed as a 6–0 victory for the opposing team.

No protests of any kind will be allowed.

AYSO National rules will cover any situation not covered by the rules in this document. The Tournament Committee will have the final say on the interpretation and application of the rules. Always remember, “It’s for the kids” ⚽️⚽️⚽️