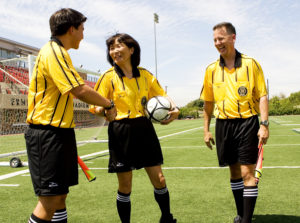 The kick off of the 2019-20 AYSO season will see significant changes to the laws of soccer.  Not all of these will affect every youth soccer game you watch or play,  but it is advised to make yourself aware of all the changes.

A comprehensive guide of the rules can be found here, and below is a summary of the most relevant for youth soccer.

Summary of Changes to Laws of Football (Soccer)

• A player who is being substituted must leave the field at the nearest point on the boundary line, unless otherwise directed by the referee

• Referee cannot change a restart decision after play has restarted but, in certain circumstances, may issue a YC/RC for a previous incident
• Team officials guilty of misconduct can be shown a YC/RC; if an offender cannot be identified, the senior coach in the technical area receives the YC/RC
• If a penalty kick is awarded, the team’s penalty taker can receive assessment or treatment and then stay on the field and take the kick

• The team that wins the toss may choose to take the kick-off
• Dropped ball – ball dropped for goalkeeper (if play stopped in penalty area) or for one player of team that last touched the ball at the location of the last touch; all other players (of both teams) must be at least 4.5 yards away

• Dropped ball if the ball touches the referee (or other match official) and goes into the goal, possession changes or an attacking move starts

• Goalkeeper cannot score by throwing the ball into the opponents’ goal

• Handball text re-written for greater clarity/consistency with clear guidelines for when ‘non-deliberate’ handball should (and should not) be penalized
• Confirmation that an ‘illegal’ handball offence by a goalkeeper in their own penalty area is not sanctioned with a YC/RC
• If, after a throw-in or deliberate pass from a team-mate, the goalkeeper unsuccessfully kicks or tries to kick the ball to release it into play, the goalkeeper can then handle the ball
• Referee can delay issuing a YC/RC until the next stoppage if the non-offending team takes a quick free kick and creates a goal-scoring opportunity
• The YC for an ‘illegal’ goal celebration remains even if the goal is disallowed
• List of the warning/YC/RC offences for team officials
• All verbal offences are punished with an IDFK
• Kicking an object is punished in the same way as throwing an object

• Once an IDFK has been taken, the referee can stop showing the IDFK signal if it is clear that goal cannot be scored directly (e.g. from most offside IDFKs)
• For defending team free kicks in their penalty area, the ball is in play once it is kicked and clearly moves; it does not have to leave the penalty area
• When there is a defensive ‘wall’ of at least 3 players, all attacking team players must be at least 1 yard from the ‘wall’; IDFK if they encroach

• Goalposts, crossbar and nets must not be moving when a penalty is taken and the goalkeeper must not be touching them
• Goalkeeper must have at least part of one foot on, or in line with, the goal line when a penalty kick is taken; cannot stand behind the line
• If an offense occurs after the referee signals for a penalty kick to be taken but the kick is not taken, it must then be taken after any YC/RC is issued

• Opponents must be at least 2 yards from the point on the touchline where a throw-in is to be taken, even if the thrower is back from the line

• At goal kicks, the ball is in play once it is kicked and clearly moves; it does not have to leave the penalty area