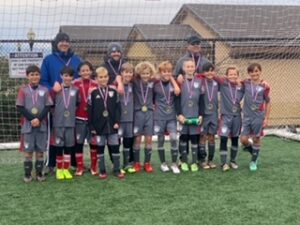 Thunder went undefeated across their four games over the weekend, winning three games and drawing one.

Thunder left it very late in both games on Sunday to win the tournament in dramatic fashion.  First scoring an equalizer with a free-kick goal in the last two minutes of play in their morning game to send them to the final, and then scoring with only 30 seconds left in  the final to beat Manteca 1-0.